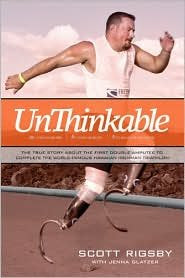 
After losing both of his legs in a car accident at age 18, Scott Rigsby battled his way back from depression and addiction to achieve the unthinkable—become the first double-leg amputee ever to cross the finish line in the sporting world’s most grueling and prestigious competition, the Ironman Triathlon. Scott has since become an inspiration to hundreds of thousands of physically challenged and able-bodied athletes the world over. Unthinkable documents Scott’s remarkable journey. From the scene of the devastating crash that claimed both of his legs, and his subsequent battle with depression and alcohol addiction, through his dawning realization that God has a greater plan for his life, readers will be inspired. From his decision to participate in the Ironman competition, to the moment he crossed the finish line, readers will engage with Scott’s unthinkable courage,
determination and faith. Unthinkable releases simultaneously in both hardcover and softcover. A portion of the proceeds will go to the Scott Rigsby Foundation, a Georgia-based non-profit organization dedicated to inspire, inform, and enable physically challenged individuals with loss of limb or mobility to live an active lifestyle.

The book is available at www.amazon.com, barnesandnoble.com, booksamillion.com, and at other booksellers nat 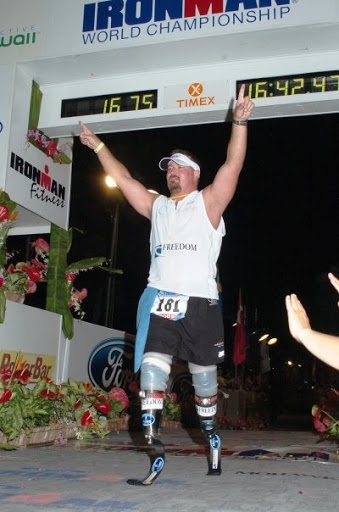 Scott Rigsby is a double–leg amputee, an athlete, and a professional speaker whose message is "Do the unthinkable." His mission is to encourage people to do more than they thought possible in pursuit of big goals. He has completed more than 20 triathlons, and in 2007, he became the world's first double–amputee to complete the Ford World Championship Ironman competition
in Kona–Kailua, Hawaii. Scott grew up in Georgia, where he still makes his home today. He is the founder of The Scott Rigsby Foundation, a Georgia–based nonprofit organization that exists to inspire and support challenged athletes. Scott has delivered keynote speeches for civic organizations, Fortune 1000 companies and schools across the country, and in 2008 was named World Vision's Advocate for Children with Disabilities. His story has been chronicled in Runner's World, Sports Illustrated, and on FOX, CNN and NBC news.