Iron Heart: The True Story of How I Came Back from the Dead 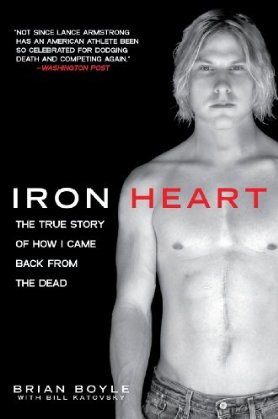 “Not since Lance Armstrong has an American athlete been so celebrated for dodging death and competing again.”—Washington Post

The magic of the Hawaii Ironman is especially vivid with the inspirational tales --of athletes who overcome illness or injury to cross that finish line on Alii. NBC does an admirable job each year filming some of these special stories. Two years ago, it profiled Brian Boyle whose story of survival and athletic redemption led the Washington Post to write, “Not since Lance Armstrong has an American athlete been so celebrated for dodging death and competing again.”

Now Boyle has a new memoir out. Written with Bill Katovsky, founder of Tri-Athlete magazine, “Iron Heart: The True Story of How I Came Back from the Dead” is destined to be a triathlon classic-- yet it transcends multisport as it deals with the most fundamental issues of what it means to be alive.

Many people I know have had tears reading the first few chapters, and yet by the book's end, they are silently cheering as they follow Brian on the Ironman course.

Here's his amazing back story:

On July 6, 2004, eighteen-year-old Brian Boyle was driving home from swim practice. He lived with his parents in Welcome, Maryland, a small town near the Eastern Shore. The roads are narrow and windy in this rural part of the state. At one intersection, a speeding dump truck plowed into his Camaro, totaling the vehicle and practically costing Boyle his life. He suffered massive internal damage, shattered pelvis, and lost 60 percent of his blood. A helicopter whisked him to a local hospital with a state-of-the-art trauma unit. Doctors had to jumpstart his heart numerous times during surgery. To lessen his pain, the medical staff also put him in a chemical-induced coma that lasted two months.

With his mother and father sitting vigil at his bedside, the prognosis looked grim for the former bodybuilder, discus thrower, and competitive swimmer who would end up losing 100 pounds. Did he suffer irreversible brain damage? Would he ever speak or walk again? Would he permanently remain in a vegetative state? Miraculously, however, Boyle managed to punch his way through the coma barrier known as a 'locked-in” state. He was actually conscious and aware of his surroundings but was unable to communicate, blink, or express himself - he soon rejoined the land of the living again.

After months of rehab where he had to relearn such basics as eating, showering, talking, and taking a few steps, he set out to achieve what seemed like two impossible goals: joining the swim team at St. Mary's College, and competing in the Hawaii Ironman triathlon. He accomplished both. On October 13, 2007, Boyle crossed the Ironman finish line in 14 hours and 42 minutes - two and a half years after the catastrophic accident that had literally pushed his heart clear across his chest. Not only did Boyle cheat death, but also he had triumphed in one of the world's toughest endurance events while being shadowed throughout the long, hot day by an NBC television crew.

This inspirational memoir is a real page-turner. You root for the likable Brian the entire way. With no memory of the accident, imagine waking up to this horrific reality-”I awake to regular beeping sounds. I'm alone in a white room and looking straight up at the ceiling. Bright lights shine all around me. My heart is beating fast. I try to raise my arms, then legs, but I can't move them. My head won't budge either. I can't blink or wiggle my fingers.”

Or consider this passage after he comes out of the coma and is finally aware of his condition: “Each morning, nurses strap me into what I call the angry chair, positioning my body so it can sit upright at a thirty-degree angle. This is supposed to improve blood flow in my legs. While I feel less like a corpse when I'm confined in the angry chair than lying in bed, I only wish I could tell the nurses to loosen the restraining belts which are cutting off the circulation in my chest, waist, and legs. The way they have me strapped down, I feel like a catatonic patient in a mental institution. Sitting like this, my paralyzed left arm dangles uselessly by my side, while my right arm rests inert upon my chest like I should be reciting the Pledge of Allegiance. The fingers on my right hand look foreign and small, just paper-thin skin stretched tightly around the bones. They remind me of illustrations of skeletal fingers in my high school biology textbook. I wonder if my entire body is skin and bones. I must have lost a lot of weight. Exactly how much?

“Not long ago, I weighed 230 pounds. My weight changed according to the sports I played: swimming on the high school team in the winter and, in the spring, throwing the discus and putting the shot for the track team. But that satisfying memory is eclipsed by Room 19's reality. I can't even toss a pencil in the air or snap my fingers. A wave of rage crashes inside my head. My body, in response, reacts by shaking ferociously, trying to wriggle itself free from the restraints. But I am too weak, so nothing happens. I slam my head against the chair's top in agitated fury and grind my teeth, shredding my tongue, to feel something other than numbness. Blood dribbles out of my mouth and down my chin.

Or weeks later, when he's at the rehab center: “{The therapist} Jamie's job is to teach me how to do simple everyday chores. We start with tying shoelaces. She places a black Nike running shoe on the table in front of me. I stare at it. Nothing really intimidating, right? But looks are deceiving, because my left hand refuses to cooperate with my right. I flop my left hand upon the shoe for support as I ready my right hand to do all the work. You would think that I'm a diamond cutter by the intensity I direct toward this simple act. I take a break after the first loop. Several minutes later, I have the next loop established. My fingers fumble trying to interweave the loops for a knot. After fifteen minutes, I finish tying my first shoelace.

Now leap forward in time several years to when he's at in the Ironman and has just made the turnaround at Hawi and is barreling down the lava highway on his Canondale CAAD8: “The downhill section is terrifying. I'm traveling so fast that the bike begins to shimmy. I must be going at least forty miles per hour. One small mishap and I'll be torn to shreds by the fall. Yet I literally throw caution to the wind. I hold on tighter to the handlebars. It might be called a death grip. But I recognize it as a “life grip.” I let out a cry of triumph and victory that acts as an emotional release of all the built-up aggression, bitterness, frustration, and anger from the past few years.

“I don't remember the accident on July 6, 2004, so I don't know if my life 'flashed before my very eyes' like most survivors say it does, but in this sustained moment, as I'm barreling down the mountain, I start having a series of memory flashbacks: waking up from the coma in the hospital; seeing white-sheet covered dead bodies rolled out on gurneys; having my parents visit three times a day; being confined to a wheelchair. Thoughts are rushing by at such velocity that I can't even keep up with them. When I finally reach the bottom of the mountain, my cheeks are wet-not with sweat but with tears of joy. “

Powerful stuff--how he went from coma to Kona. And guess what? He's still competing in triathlon, and this past August went sub-11 hours at the Louisville Ironman. Not bad for someone whose heart had stopped eight times in Intensive Care. Brian has the heart of a warrior and the soul of a poet.

Posted by Mitch Thrower at 1:34 PM